Behind The Scenes: Using Google Street View in Interactive Storytelling 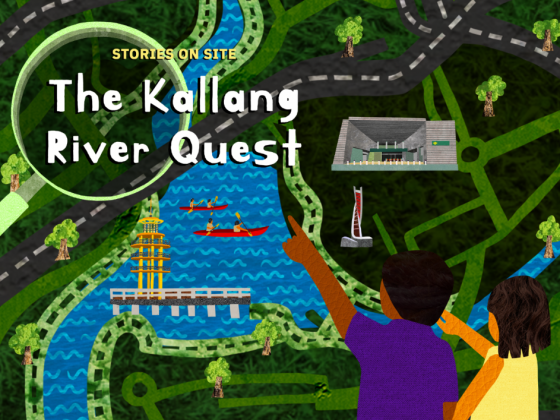 “Stories on Site”, as a concept, was a response to the heightened interest in 100% digital arts projects for the second half of 2020, when there was much uncertainty about how social distancing measures would go and the feasibility of in-person arts programmes in light of COVID-19.

The idea had been brewing in our heads ever since we saw an Editions at Play project titled “Entrances and Exits” (check it out here). Our team wanted to do something similar.

We thought it would be fun to fuse narrative storytelling with Google Street View, a functional service people use almost every day. We hoped the story would create more interest about Kallang and allow people to explore it virtually from their homes. For our main audience – children  – we thought the new format and user interface might appeal to even the most reluctant of readers.

Through the process of putting the story and 360° photos together for Stories on Site: Kallang River Quest, here’s what we learnt about Google Street View (GSV):

1) Indoor places are also on GSV

Some might know that a car with a large 360° camera mounted on top of it drives around cities to capture GSV, first started in 2008 (see article here).

In 2008, you may have seen news of a car with a large 360° camera mounted on top, driving around cities to capture street photos for Google Maps (read about it here). However, did you know that GSV also covers indoor places? We were pleasantly surprised to see images of the Kallang Estate Market available, for instance.

Perhaps one day we can do a story set entirely indoors! 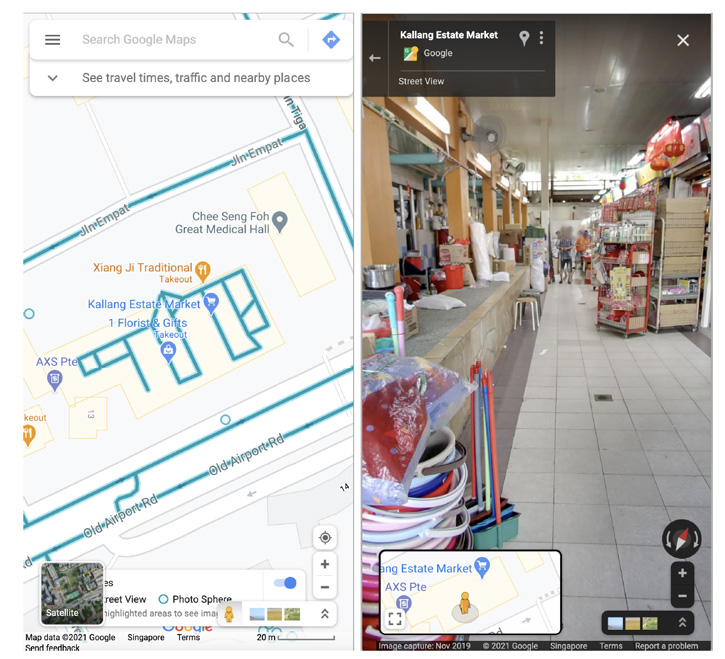 Kudos to the author Akshita Nanda for writing something she couldn’t really visualise, and for joining us on this adventure. She spent time walking around Kallang to get a better feel for the area while developing the story, but unfortunately some places accessible on foot are not viewable on GSV.

To smoothly move our story’s protagonist (the reader, a.k.a you) between certain locations, we thus changed it such that a motorbike would bring you around.

This was one important thing we learnt about writing content ‘native’ to the medium. 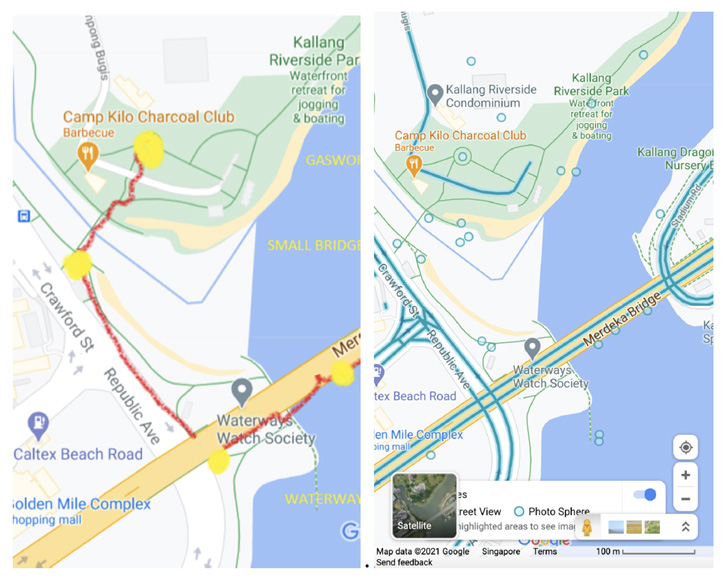 3) Proportions and angles matter, when placing illustrations  in GSV

One feature that was introduced quite late in the story’s development was the introduction of more historical facts about  the locations, which we wanted to do in an organic way, such as through the use of a signboard like the historical markers often found at heritage landmarks. .

Due to time constraints, we created only one signboard and superimposed this onto the GSV images at relevant points of the story. You can see how it looked below – we laughed at the last one, and tried out different GSV angles and photos to make it look more realistic.

In some photos, the signage was so big that it looked like a bridge people could walk under.

With a 3D space (which GSV’s 360° photos simulated), depth also had to be considered, so objects placed at a greater distance from the viewer had to be smaller. 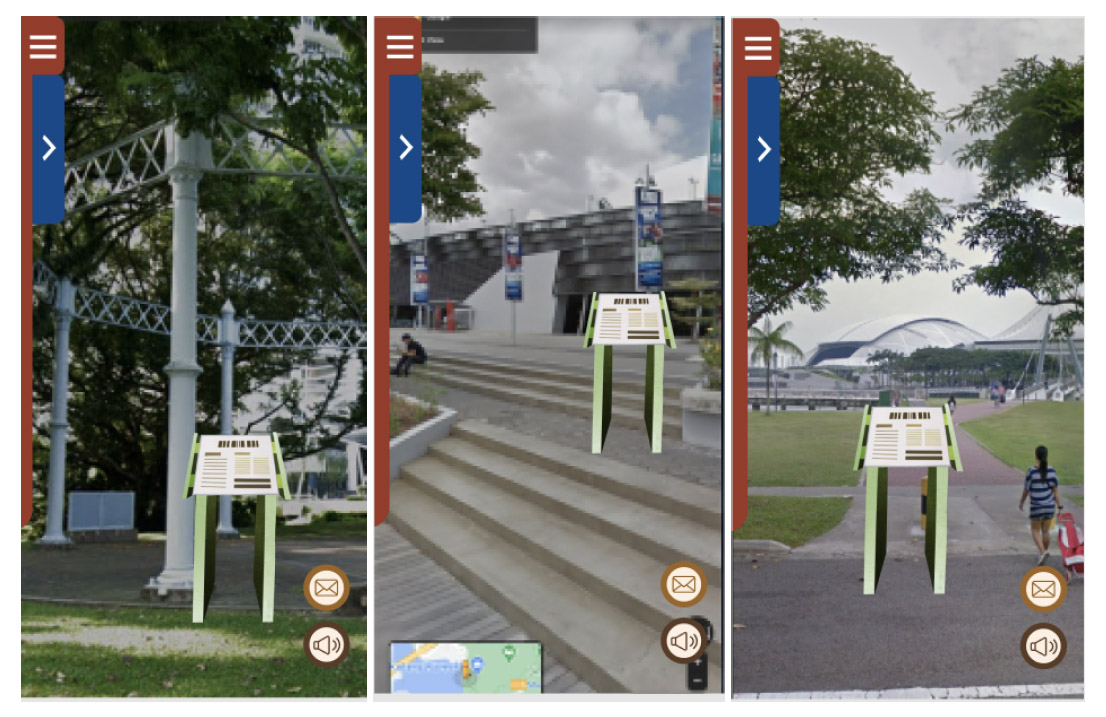 Placing the same signboard asset within Google Street View – from okay to not-too-bad to LOL-oh man!

In one of the locations, there was a lorry blocking the view. We weren’t sure whether to take a new photo ourselves (which would have been time-consuming) or to just use a different, more faraway view of the location.

Then we realised we could use the timeline feature, which is the ability to toggle between different Street Views taken over the years. (Every few years, Google updates its Street View photos but keeps the older photos available).

Eventually, since there had not been any significant changes to that particular location in  Kallang since 2018, the ‘old’ photo we ended up using in the story still accurately shows what you’d see at the real physical site.

Maybe one day we can do a time-travel story. Not very far in time, since  the GSV service only came to Singapore in 2008, but a story like that would allow users to explore the same sites at different points in time. It could be a good way to think about the rapid urbanisation of the city and the places we sometimes lose in that process. 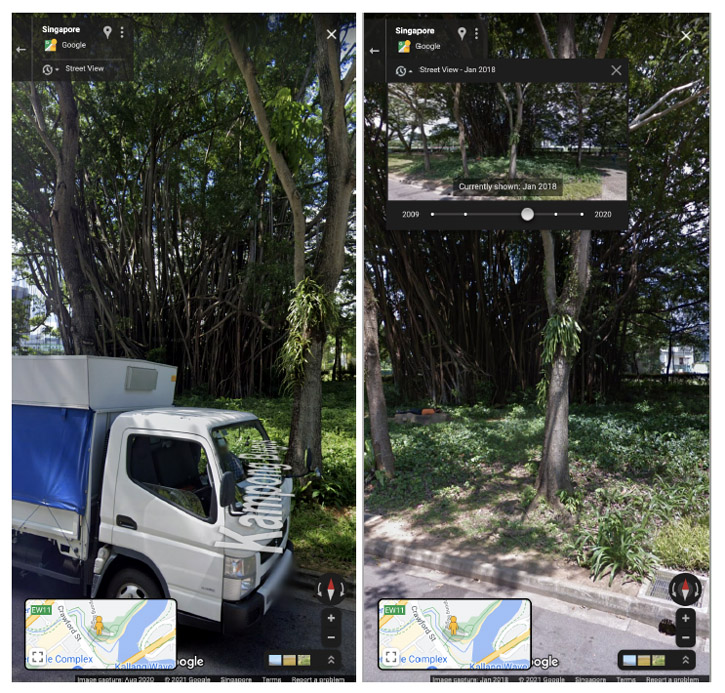 5) The importance of framing

Composition is key in photography, and so when developing the storyboards for this project our designers selected every single frame with great care.

We had to consider several factors when doing so, such as how visually interesting a particular angle was, whether it was logical in terms of the distance covered between frames to convincingly feel like the user is ‘walking’, etc.

Working with the GSV’s 360° photos was a unique process: a photographer can physically change position or wait for a passing car to disappear, for instance, but we had to work with the available material and strategically angle or crop views.

Designing for both mobile and desktop is akin to working on two separate configurations, too, which meant double the amount of work required for working out the user’s paths.

Stories on Site: Kallang River Quest was such a fun project, we decided to do a new one this year! 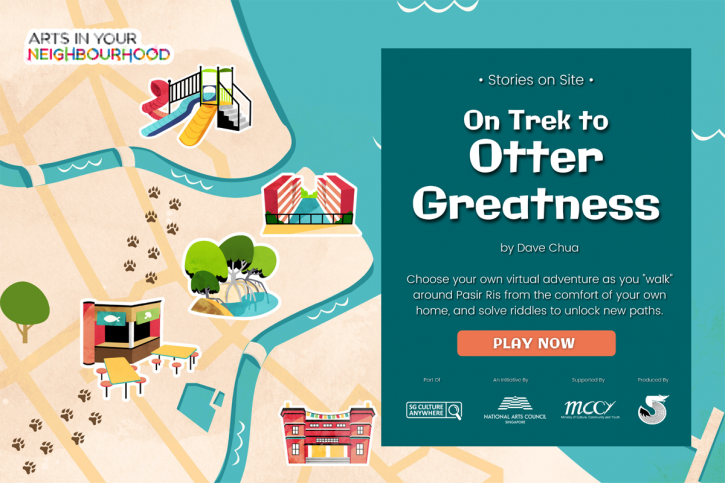 What else are we looking to create?

We really wanted to work with Google Earth Studio, an animation tool for Google Earth’s satellite and 3D imagery. Sadly, the Pasir Ris town is not available on this so that  wasn’t possible for our latest project, but we’d love to explore that for any future iterations of Stories on Site! 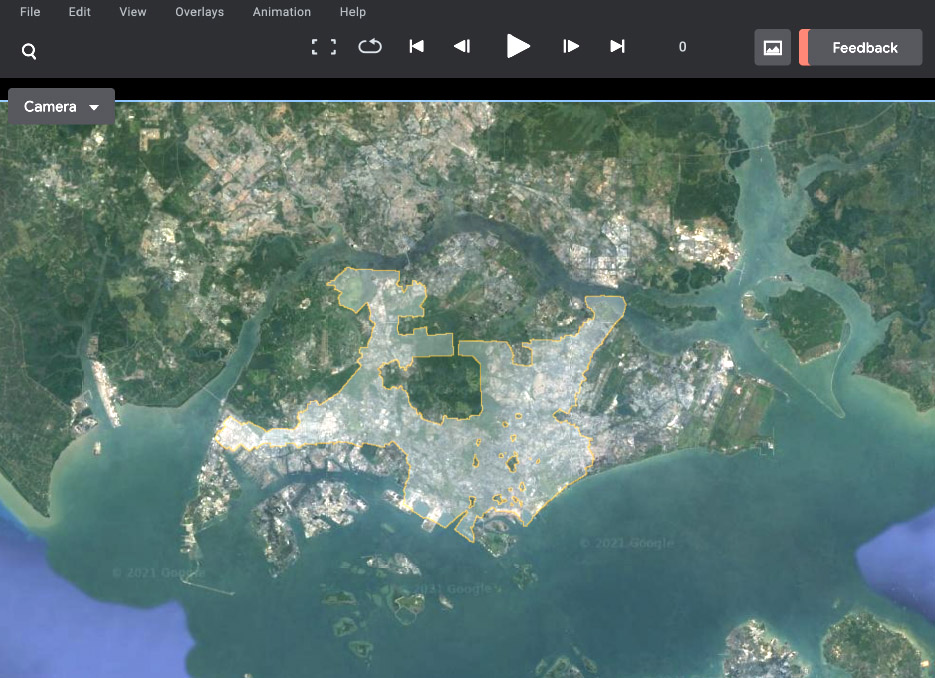 Stories on Site: Kallang River Quest is a commission for
the National Arts Council’s Arts in Your Neighbourhood in Nov 2020