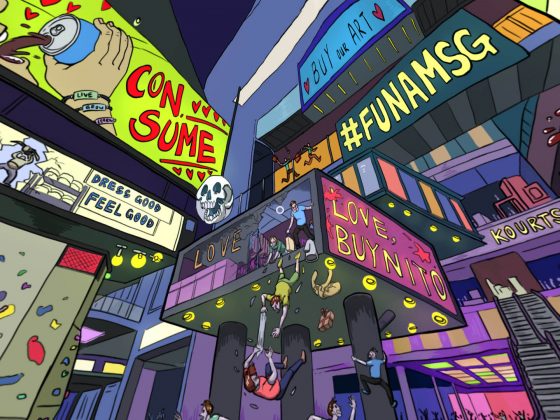 DRESS GOOD, FEEL GOOD. SPEND MORE, FEEL BETTER. Who wouldn’t want to feel better, really, at a time like this? But maybe the impeccably dressed, laptop-wielding zombie advancing dangerously towards you doesn’t make the most convincing case.

It’s not your average shopping mall scene, for sure — and we are not terribly keen on experiencing Dan Wong’s apocalyptic re-imagining/vision of the mall firsthand. Commissioned by Tusitala, the Singaporean artist’s 360° illustration is a creative response to “Diary Of A Man Forced By His Boss To Visit The New Funan Mall” by Rice Media writer Pan Jie, which commented on the new Funan mall’s transition from IT to lifestyle.

As Singapore Art Week returns this January with even more offerings than before — including “the first mall-wide art activation in Singapore”, titled Creative Unions — here’s our contribution to the nation’s biggest celebration of visual arts. 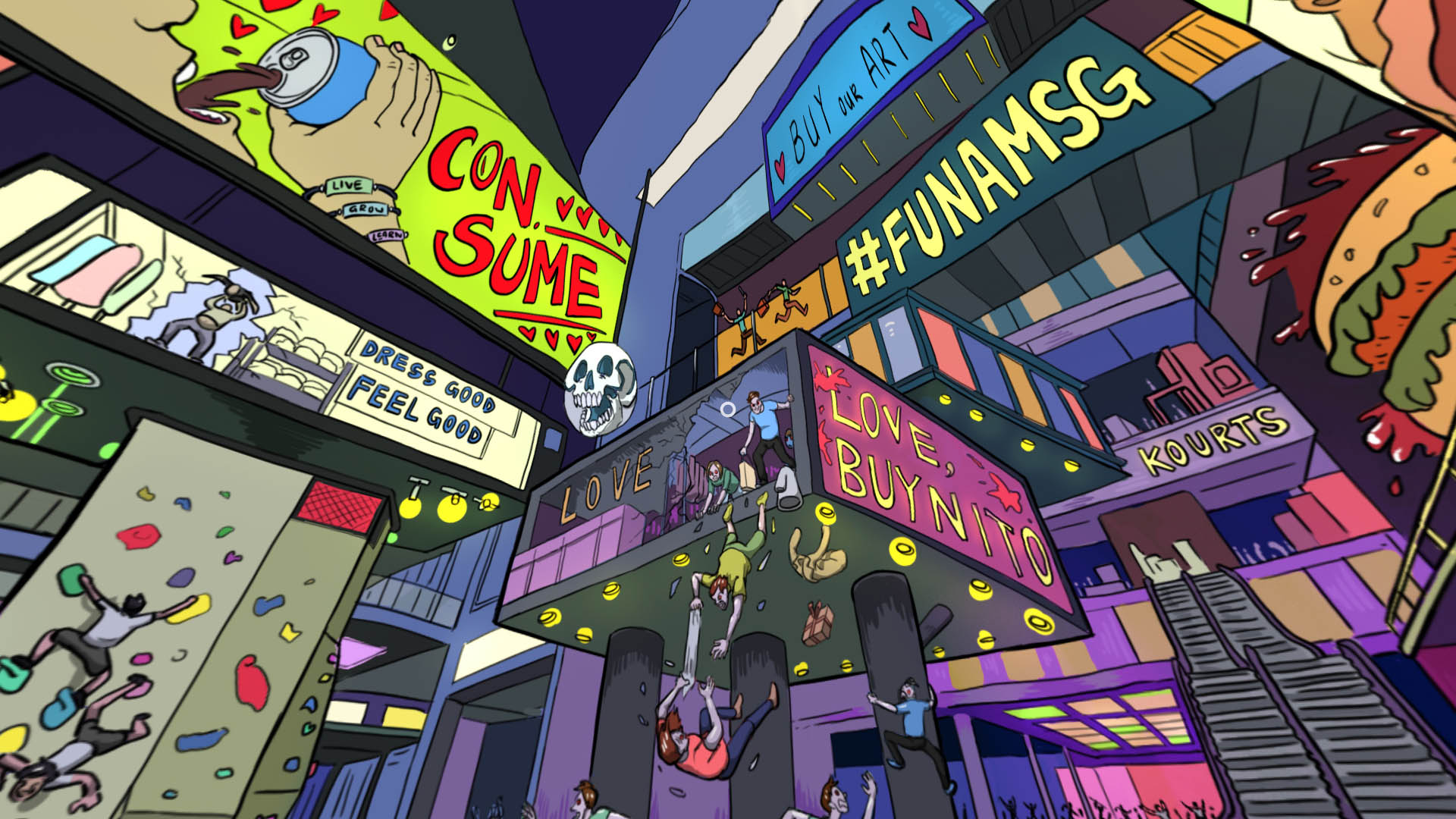 Dan interpreted Pan Jie’s article as a satirical fright night scene, with characters turning into zombies possessed by the mindless hunger of consumerism. Created for 360° viewing, the illustration transports audiences to the Funan of Pan Jie’s nightmares.

What goes into creating a 360 artwork?

The Tusitala team is always excited to see how the immersive nature of 360° augments the storytelling experience. Because of the unique format/properties though, creating a 360° illustration takes a slightly different process from that of 2D drawings.

Since the draw of 360° is being rewarded as  you gradually explore the space, we started out by browsing dozens of stories in Storytel’s audiobook catalogue for scary Singapore work, then looking for visually interesting scenes with different set pieces within these stories. One thing we didn’t want was action sequences (e.g. a chase scene) which it might have been strange rendered as a static image.

What’s interesting about a 360° experience is that it is “free-and-easy”. Unlike film (and even a comic or illustrated book) where the user’s eye is guided across a scene or page, one cannot really control the “sequence” or direction in which users view the work.

We hypothesised that some people would just click around randomly, while others might try to listen to the audio for clues on what to look out for. So the idea/element of surprise and discovery is important in the experience of looking around, and that means the illustrator also has to ensure that the top and bottom spaces are filled up.

Perhaps some other unexpected challenges illustrators face when creating 360° images for the first time are the increased difficulty with perspective (e.g. having lines meet at the correct angle, illustrating patterned floors and ceilings), making items ‘pop’ against the background, and adequately portraying heights of objects nearer to the viewer, etc. As the canvas is large, a lot of time is usually required to fill it in with details as well.

The technical side of things is a little easier. There are many different software and tools to create 360° illustrations such as CubeMap or Skymap, Photoshop, Panopainter, Procreate, or Blendr, etc. You can even sketch out the illustration on paper and scan it into a digital file. Different strokes for different folks. 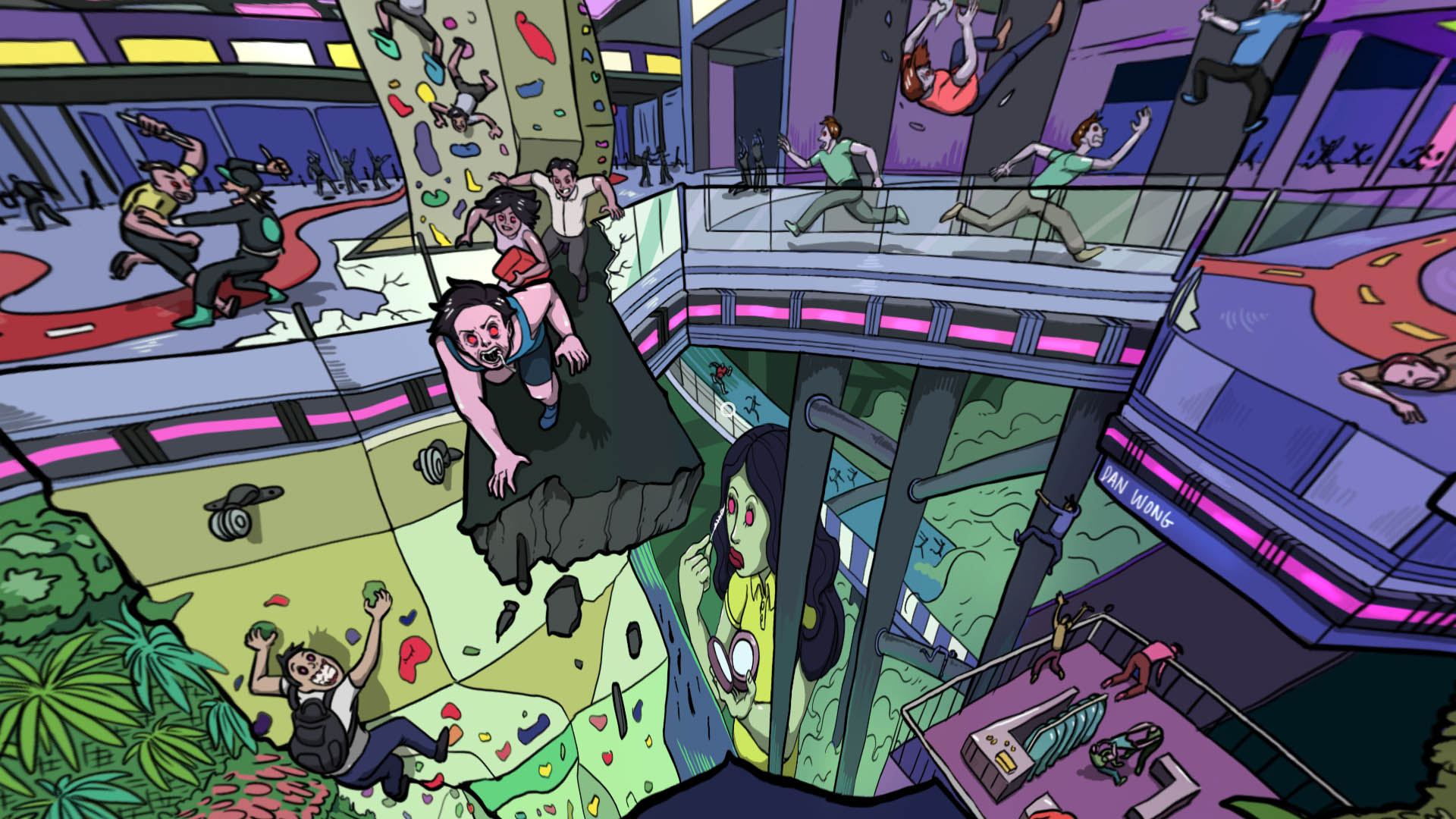 A scene from Dan Wong’s “Forced to Funan” 360° illustration

Every date winds through these non-places at some point, if only because there’s a GV on the top floor, or clean, spacious bathrooms. Family outings also gravitate hither, probably because they have solid air-conditioning and are conveniently joined at the hip to MRT stations.

Love them or hate them, you can’t avoid them. They’re a Tabula Rasa; the background against which the drama of Singaporean life takes place. They are cathedrals to consumption, in whose temperate air our baser compulsions are recognised, forgiven and cheerfully rebranded as ‘lifestyles’.

As a concept and production illustrator, Dan Wong‘s works are not for the faint-hearted (Read more on his work in a CNA interview with the artist here). They are compelling, yet very ‘graphic’ — some even grotesque.

Dan’s work here was created to exemplify a certain genre of horror, and this 360° illustration has gone the postmodern zombie route. After the initial laugh, one asks themselves: are we just zombie-slaves to consumerism, fueled by a fetish for everything tech, novelty and glitz? #existentialistcrisis #smartnation

While you mull over the question en route to the shopping mall, check out our illustration, then read Rice Media’s “Diary Of A Man Forced By His Boss To Visit The New Funan Mall” or listen to Storytel’s audio recording of the article. 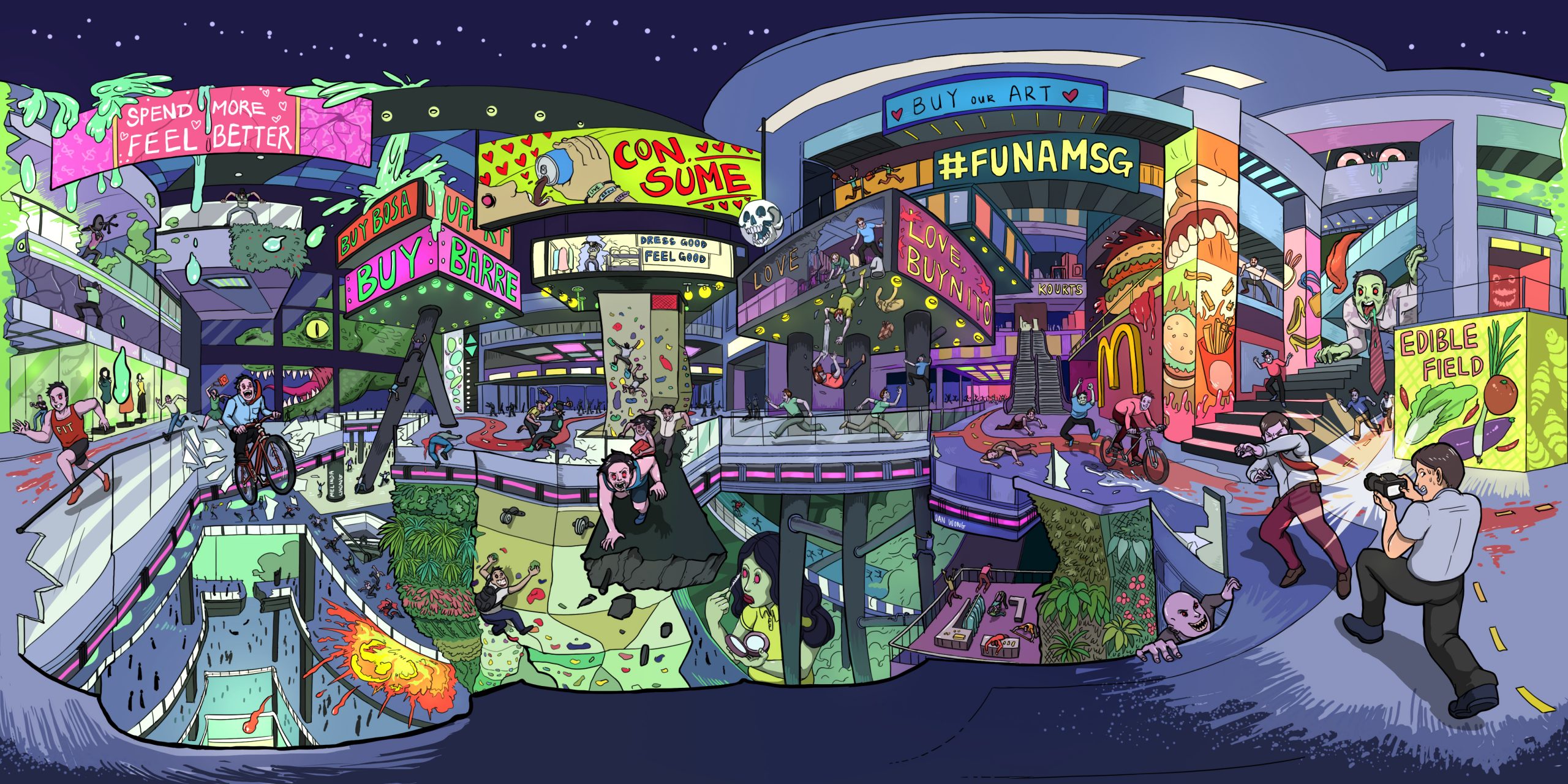