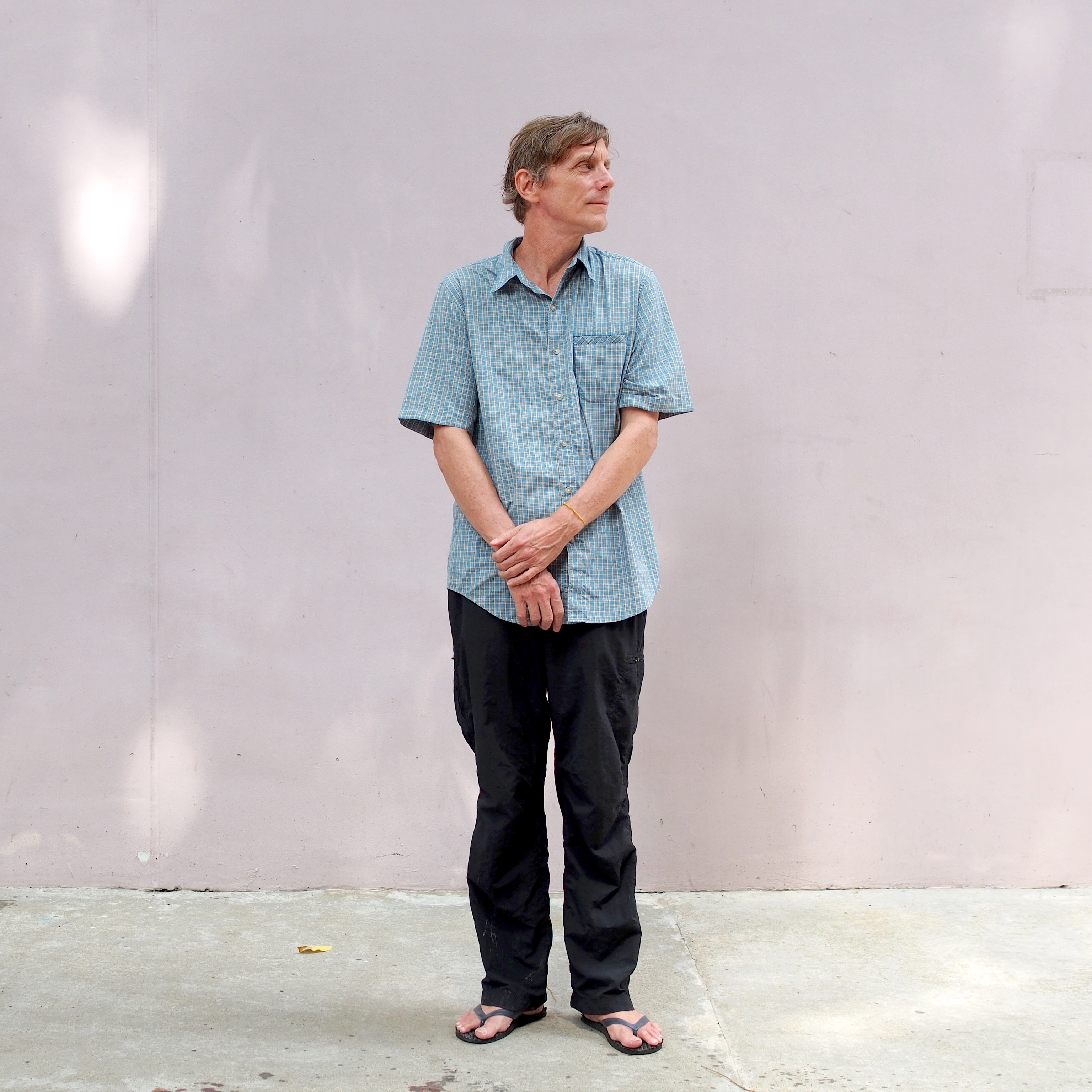 What is something that you always carry in your bag? What do you think that the item says about you?

I almost always have scrap paper in my bag. That probably means that I prefer to write things on free, recycled paper rather than use an expensive nonbiodegradable object that requires batteries.

You have a very unique version of a namecard! Tell us more about it.

Once, in Tokyo, I was asked to do the interior design for a restaurant. They were dismantling the old configuration and there was a mess all around. In the midst of all the decay were two rolls of paper, the type used for receipts. Immediately I thought of stamping them with rubber stamps. That was over ten years ago. I still do this, creating new rubber stamps along the way. It is fun, efficient and cheap. Each piece given out is unique, informative and expressive.

What is your relationship with technology?

I don’t think I have a strong relationship with technology. Of course I use devices and softwares, but everything comes down to what needs to be communicated and to whom. For example, I wish I could send more handwritten letters;ones that require envelopes and stamps. Facebook is disposable and emails are usually more about exchanging information than anything else. There is magic with handwritten letters in that the sender has touched the very thing that is received.

When it comes to visual arts like photography and video, of course I am interested in the technology side, but the story or idea is always far more important. Having said that, I become ecstatic when I can work with someone who has mastered an aspect of technology.

We hear your next venture includes 360 virtual reality storytelling.

In Singapore, there is a company called Hiverlab which specialises in 360VR storytelling. By chance, I met the company’s founder, Mr Ender Jiang. I told him about the research I was doing for a book on how technology is changing cinematography. I mentioned my background in video art, television and writing and volunteered to produce a short story. Ender and his team kindly agreed and we created a short film called Beach Road. This was a fantastic opportunity for me to move away from theory and get hands-on experience with 360VR. We are now researching ways to share it with people. It can be displayed on Youtube, but the feeling is very different. The story is simply a day in the life of a parking lot attendant who wants to be a writer. We are fortunate to to have a soundtrack that features Bani Hayke and Chen YiQi.

What got you interested in the medium? Could you tell us more?

I have always worked on all kinds of film and video projects, and in all capacities, from pre-production to production to postproduction. In Tokyo I worked intensively as a video artist and in Hong Kong I created promos for Cartoon Network and Turner Classic Movies. I was the lead actor in one of Boo Jun Feng’s films, one called The Changi Murals. Years ago, when online videos were unusual, I was able to experiment with the Japanese actress Kumiko Akiyoshi, as well as be the director of photography for her directorial debut. I enjoy making movies and visual art very much, but the costs involved are very challenging.

What do you think the potential is, and what are some obstacles you foresee?

As a storyteller, where do you find inspiration? Do you find stories, or do they find you?

I wish there were an easy answer to this question. I see potential stories everywhere. Some story ideas begin like flashes, others ideas are like mud. But the beauty of writing is that unpredictable changes can happen. Over time, that stinky mud might become angelic and that story idea that was so brilliant at first may drift away like dust. All I can really say for sure is that writing takes time and that within that time there are surprises, some that help and some that do not. Also, I do a lot of research which can shape the stories in unexpected ways.

You describe I Ate Tiong Bahru as a lyrical documentary. Indeed, the book evades any particular form. Could you tell us more about the experience of writing it? Was it an artistic decision to frame your work in this manner? Does the form comment on/contribute to the story as well?

I Ate Tiong Bahru, is simply, the kind of book that I would like to read. With the title and the cover design I wanted to make it clear that the book is unusual. It is a collage made up of short stories, and some of these short stories are also like collages. However, I really worked to avoid the trappings often found in “experimental “writing.  I think you can challenge readers without making them feel inferior or perplexed. IATB is loaded with facts and history and also concerns itself with food. It is self-published which means I did not have to conform to one genre or style. This not only felt natural to me, it seems to be suitable to the area’s character and residents. Variety: Tiong Bahru used to be full of variety.

I should mention that I first visited Tiong Bahru in 2002. The Art Deco architecture was a surprise, but the market seemed normal to me; it seemed similar to those markets near where I lived in Hong Kong. Then, in 2009 I suddenly found myself living on Moh Guan Terrace. Before this, I had written books about Clementi and Fort Canning, so Tiong Bahru was a natural subject for me to write about. I am happy with the present book and the residents of Tiong Bahru seem to support it. I would, however, like to get it translated into Chinese.

What’s next on the cards for you?

I am completing Bali Wave Ghost, a novel which I began working on three years ago. Then I must conclude the sequel to I Ate Tiong Bahru. Maybe an exhibition. A movie. A book about gelato or a cruise with my mom. Who knows?